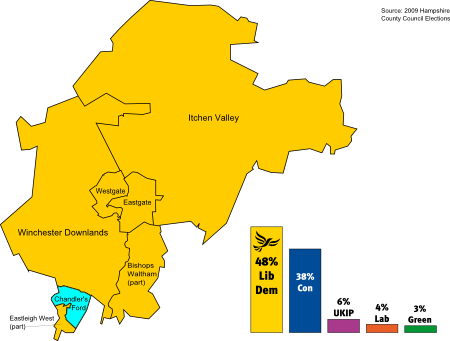 On Friday, we found out that we had won 6 out of 7 seats in the new Winchester constituency.

Across the new constituency, the Lib Dem team got 48% of the vote. The Conservative vote slumped to 38%. Labour collapsed to 4%. UKIP got 6% of the vote and the Greens 3%.

These are better results than we achieved at the County Council elections on the same day as we won the 2005 General Election. Compared to 2005, the Lib Dem vote is up. The Conservative vote is down.

Overall, we saw a 4.4% swingÂ fromÂ the ConservativesÂ toÂ the Liberal Democrats compared to our vote last year and a clear swing in our favour compared to the results on General Election day in 2005. 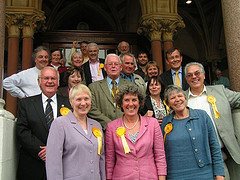 Many congratulations to Jackie Porter, Charlotte Bailey, Brian Collin, Phryn Dickens, Peter Mason and Alan Broadhurst on their victories and many thanks to Terry Holden-Brown for his commitment and hard work on the campaign in Chandler’s Ford.

A big thank you to the voters who decided to back our candidates. We also owe a huge debt to the staff and volunteers who worked so incredibly hard over the preceding months, and to our exceptional candidates for their incredible commitment and hard work over the last few months and years. There’s no doubt that their personal work played a pivotal part in our success on Thursday.

It still hasn’t fully sunk in, but these results put us in very good spirits for the General Election campaign – whenever it may come.