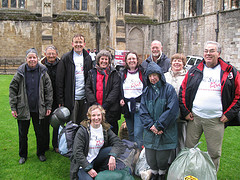 Thank you to everyone who gave so generously to members of the Lib DemÂ SleepÂ OutÂ team (or anyone else!) as part of theÂ BigÂ SleepÂ Out.

Thanks to your generosity the Lib Dem team has so far raised more than Â£3,800 towards the Nightshelter and the Trinity Centre! Â

We almost all got rather heavily rained on and didn’tÂ sleepÂ too well from around 3 a.m. onwards, but it was great to be part of such a well-organised and successful fundraising event for such a good cause. And, after all, no matter how wet we got, sleeping out on one damp night in May is nothing like having to do it through the winter or for weeks or months on end. We all knew we had dry homes and beds to go home to afterwards. The important thing was that we raised as much money as possible to help people who don’t have that choice.

Earlier in the evening, there were an excellent series of talks and speeches moderated by Debbie Thrower, who also read a very thought-provoking text on her own account (which I unfortunately didn’t note the source down for). Â It was particularly moving hearing from people like Ed Mitchell who had been rough sleepers, how charities like the Winchester Churches Nightshelter and the Trinity Centre had helped them get their lives back on track. Â (You can buy Ed Mitchell’s book here if you would like to know more).

There are some good pictures and reports on the Sleep Out at the main Big Sleep Out website. Â If you’re interested, you can alsoÂ read the live Twitter reports of the evening.

Even though the evening is over, it remains an urgent cause and both charities are very stretched by high demand.Â 60 people a month are turned away by the Night Shelter due to lack of space. On average, 20 of the 50 people who use the Trinity Centre report that they slept rough the night before.

If you’d like to donate to the Big Sleep Out by sponsoring the Lib Dem team, you can do so atÂ http://www.justgiving.com/martintod. You can alsoÂ give directlyÂ without sponsoring anyone. Either way, every penny you give (plus Gift Aid) goes straight to the two charities and will help make a real difference.

If you enjoyed this post, please consider leaving a comment or subscribing to the RSS feed to have future articles delivered to your feed reader.
This entry was posted in Housing, Winchester and tagged Big Sleep Out, Charity, Homelessness, Housing, Winchester. Bookmark the permalink.