Martin Tod, the Liberal Democrat Prospective MP for Winchester, has joined forces with the National Deaf Children’s Society (NDCS) in calling for the Government to ensure new school buildings are suitable for all children to listen and learn in. 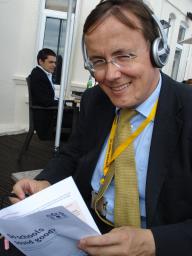 As the Government spends billions of pounds on the schools rebuilding programme, NDCS warns that many schools are being built with poor acoustics that do not meet minimum national building standards.

New research shows that good acoustic classrooms improve learning, reduce disruptive pupil behaviour and decrease stress levels of teachers. Yet Freedom of Information data received this year by NDCS showed that only one in five of local authorities could confirm they had built new schools that met the government’s minimum acoustic standards.

At the Liberal Democrat party conference in Bournemouth, Martin Tod met with NDCS to find out what poor acoustics sound like for hearing-impaired pupils – including listening to the attached simulations of the impact that improved acoustics have for hearing-improved children. NDCS is running the Sounds Good? campaign to demand the Government take urgent action to ensure schools are built appropriately for hearing-impaired children, and that the acoustics are tested for quality before they are used.

“I fully support the NDCS Sounds Good? campaign, and I’m disappointed to hear that so many local authorities are neglecting their responsibility to ensure new school buildings meet national acoustic standards. I was alarmed when I heard the immense difficulties pupils with a hearing impairment face when trying to hear a teacher in a classroom with poor acoustics. We should not be putting children in classes in which they cannot learn. Barriers such as this must be broken down if we want to give deaf children the best chance of achieving their full educational potential.”

“Being able to understand what the teacher is saying is essential to learning. Yet the Government is allowing billions of pounds to be spent on building schools that are unsuitable for children to listen and learn in, and in which deaf children experience particular difficulty. As the majority of deaf children now attend mainstream school, it is crucial that new schools don’t just look good, but sound good. We are calling on the Government to urgently introduce a mandatory test for all new school buildings to ensure they comply with government standards, to stop generations of deaf and hearing children from missing out on a quality education.”

If you enjoyed this post, please consider leaving a comment or subscribing to the RSS feed to have future articles delivered to your feed reader.
This entry was posted in Education, Latest News. Bookmark the permalink.