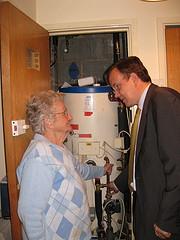 During the cold period, elderly residents suffered as the boiler at the city council-run Danemark Court sheltered housing complex couldn’t keep up with the job of keeping people warm. Elderly tenants in their 80s and 90s were forced to use electric heaters running up extra bills of hundreds of pounds.  Some were unable to have hot baths or showers.

The council has now said that the boilers will be replaced.

Mr Tod met Mrs Esme Lipsham, 89, who has been organising the campaign to get better heating.

“The residents of Danemark Court are owed an apology.  I’m shocked at how they have been treated.  The City Council has let people down.”

“Since the new communal boilers were installed, central heating for the building just hasn’t been good enough, especially for people whose flats which are furthest from the boiler. Despite what has been said by councillors defending what has happened, switching on the immersion heater isn’t enough to keep the flats warm.”

“Some people have run up extra electricity bills of hundreds of pounds to keep extra electric heaters on so that they stay warm.  The council has promised to pay back the difference, but it’s still very worrying for people with small pensions.”

“One thing that rightly annoys the tenants is that they’ve still not seen councillors or senior council management come along to apologise and explain what’s going to happen.  It’s time for them to stop hiding in their offices and go along to face the music.”

If you enjoyed this post, please consider leaving a comment or subscribing to the RSS feed to have future articles delivered to your feed reader.
This entry was posted in Housing, Latest News. Bookmark the permalink.