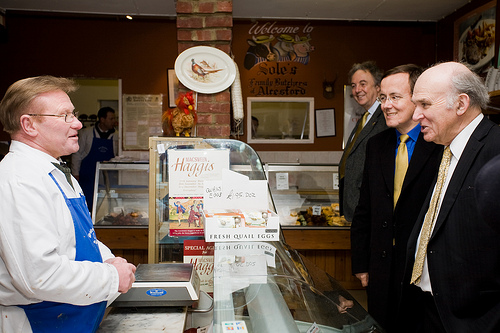 Accompanied by Liberal Democrat Prospective MP for Winchester, Martin Tod, Mr Cable visited the Alresford Gift Shop, both the town’s butchers – C.E. Evans & Son and Sole Butchers, the Alresford Builders Merchants and the Alresford Cobbler before finishing with a cup of coffee in Caracoli.

Mr Cable visited the town after speaking at a conference on the “Hampshire’s Road to Recovery” held at Intech.

It was great that Vince had the chance to meet local businesses and hear about how the recession has impacted them and also about the treatment they’ve been getting from the banks. Because we’re a relatively prosperous part of the country, some people assume that we’ve been unaffected, but that certainly isn’t the case for everyone. It’s vital that we get economic policy right if we are not to be thrown back into a deeper recession.”

If you enjoyed this post, please consider leaving a comment or subscribing to the RSS feed to have future articles delivered to your feed reader.
This entry was posted in Economy, Latest News. Bookmark the permalink.