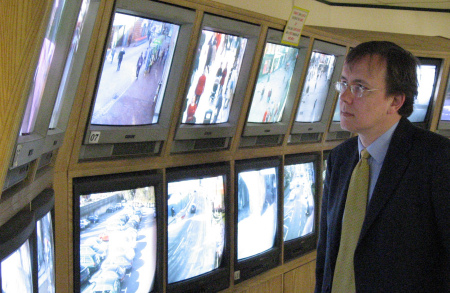 Fascinating visit to the CCTV control centre today. Although, overall, Winchester has relatively low crime figures, that doesn’t make things any better for any individual who is the victim of crime, and CCTV is having a good effect in making the centre safer.

That said, the system is beginning to creak. There are too many trouble spots that are not covered by CCTV and, for technical reasons, it’s hard to extend it to cover areas outside the city centre. It’s been made clear to me during earlier visits around the city that there are still some areas which would benefit from CCTV that don’t have it.

It can also be difficult to link the system in with other CCTV systems, which could help make things safer for people late at night and make it easier for police to track criminals escaping from Winchester by car.

People have raised concerns about CCTV and civil liberties. As long as it is used, as it is currently, to spot crime, collect evidence of crime and direct the police ‘in hot pursuit’, I don’t think it poses much of a threat. Indeed, I would like to see Winchester’s CCTV system modernised.

That doesn’t mean we shouldn’t watch for (and oppose) some of the developments that are being put forward in other places. The Conservative Council in Ealing is planning to start using hidden cameras disguised as house bricks and tin cans, supposedly to watch for fly-tippers. The Labour Party is pushing for a national ID card and database which, if combined with face tracking technology (which, in turn, is being asked for by police chiefs), would enable CCTV cameras to track everyone as they went about their lawful business.

These new technologies, if unchecked, could mean that we end up with hidden cameras everywhere (rather than in areas at risk of crime as currently), tracking everyone simultaneously as they go about their business (which also can’t be done currently).

The critical thing is that we don’t lose sight of our objectives when using CCTV. If we’re using it to watch for and tackle crime – it’s fine. As soon as we go beyond that, it’s not.

If you enjoyed this post, please consider leaving a comment or subscribing to the RSS feed to have future articles delivered to your feed reader.
This entry was posted in CCTV, Civil Liberties, Crime. Bookmark the permalink.