Will 20 mph be enforced in Winchester? Here’s the answer…

Following a recent report in the Hampshire Chronicle, there’s been quite a bit of confusion about whether 20 mph will be enforced in Winchester or not.

In order to sort this out, I wrote to the Police Commissioner and the Chief Constable – and now I have their answers.

As you might have seen in the Hampshire Chronicle, there is now some confusion amongst residents in my area about the policeâ€™s policy on speeding.

As Iâ€™m sure you know, in the most recent year for which we have figures, 597 people were killed or seriously injured on Hampshireâ€™s roads and both Winchester and Hampshire are well below the national average in the most public health statistics on this figure (as attached).

My specific question relates to enforcement of 20 mph speed limits.

Are these speed limits due to receive a different level of enforcement compared to other speed limits?

Is there an agreed policy that specifically highlights 20 mph (in comparison to all other speed limits) as a speed limit that will not be enforced? Would I, for example, be able to drive through a 20 mph area at 30 mph with a police car behind me and expect nothing to happen?

In the past, Iâ€™d also been told that Community Speedcheck (which is getting a strong level of interest from local residents who are keen to see the 20 mph work) could lead to action in some areas if it highlighted that an area had particular problems with speeding. Had I understood that correctly?

Any clarity that can be provided on this would be much appreciated. This is an area of great interest â€“ especially in areas where the 20 mph has been introduced â€“ but also amongst other Winchester residents that use the city centre area 20 mph zone.

The Police Commissioner was first out of the blocks!

Thank you for your question in relation to the 20mph speed limit in Winchester. Before this speed limit was introduced, the City Council undertook a period of consultation. In the consultation documents they acknowledge that “in the historic core of Winchester, the majority of traffic is already travelling at relatively low speeds and if more vehicles travel at 20mph or less this may encourage others to do likewise.” Addressing the question of how the limit will be enforced the consultation papers say “Signs at the start of the speed limit would be used to indicate to drivers that they are entering a 20mph speed limit restriction. In addition, roundels painted on the road and small repeater signs will be required to re-enforce the speed limit at specific intervals. The Police are responsible for enforcing speed restrictions, however 20mph speed limits are intended to be largely self-enforcing and are only introduced in areas where existing traffic speeds are already at a level where they are considered to be self enforcing.”

This position is supported by international studies which show that 20mph speed limits enforced with signage alone usually achieve a mean speed reduction of between 1-2 mph and so when pre-implementation mean speeds are 26mph or less the speeds will reduce to 24mph or less following the introduction of the new speed limit. This is reflected in the Department of Transport guidance on setting local speed limits (DfT circular 01/2013) which, in the case of 20mph limits, states that mean speeds should not exceed 24mph. The document clearly states “to achieve compliance there should be no expectation on the police to provide additional enforcement beyond their routine activity, unless this has been explicitly agreed.” Referring back to the consultation paper it would seem that such an explicit agreement is not in place.

Inappropriate speed is widely acknowledged as being a contributory factor in road collisions, particularly in those which result in death or serious injury. Since 1st April this year there has been 1 serious injury collision recorded within the confines of the new 20mph speed limit. This collision was as a result of a vehicle reversing and driving onto the foot of a pedestrian and so speed was not a contributory factor in that collision.

Notwithstanding this I am keen to ‘protect people and places’ and have included road safety in my police and crime plan. This may take a variety of forms from ensuring vehicles are road worthy to Community Speedwatch. Indeed I have made Â£135,000 available over 2 years to courage the expansion of Community Speedwatch. Community Speedwatch is specifically designed to take place in 20 or 30mph limits or zones and there are currently 754 Speedwatch volunteers in 61 active schemes throughout Hampshire and the Isle of Wight. If you would like further information about how you could become involved in this then please contact your local Neighbourhood policing team.

I fired off the following letter for clarification:

Thank you very much. This is very helpful.

Can I confirm that the expectation is that Hampshire Police will be operating in line with Department of Transport policy – namely that the police won’t be providing additional enforcement, but will be undertaking the same ‘routine activity’ that they undertake with all other speed limits?

I am pleased to hear about your support for Community Speedwatch. I am very keen to get this set up too. One of my colleagues, Cllr Derek Green, is leading on this in the Stanmore 20 mph zone in my division.

And then got further clarification:

Thank you for your reply. Dedicated Police speed enforcement activities are directed towards the areas where they will have the greatest impact in terms of reducing the numbers of people killed and seriously injured on our roads. As a consequence, there was no dedicated speed enforcement activity undertaken by the police on the roads now subject to the 20 mph speed limit before the limit was reduced. Therefore, any activity directed to those roads now, as a consequence of the reduction in the posted speed limit, would constitute additional enforcement activity.

However the DfT guidance means that if an officer, engaged in routine patrol, were to see an offence committed then they are free to deal with that offence, however there is no expectation that officers would be deployed in dedicated speed enforcement activities.

I then got a very helpful letter from Inspector Andy Storey from the Roads Policing Unit on behalf of the Chief Constable.

As the roads policing lead for the north of Hampshire I have been asked to respond to your query regarding the enforcement of 20mph limits.

The short answer to your query is that there is no policy that sets apart enforcement in 20mph limits to enforcement in any other area subject to a speed restriction.

The Constabulary though does operate a ‘tiered’ approach to enforcing speed limits across the Force area.

My officers on the Roads Policing Department will concentrate their enforcement activities in areas that display a high collision history – they will generally not include roads subject to a 20mph restriction.

I currently work from Whitchurch which also has a 20mph restriction and am often asked this very question. However, over the last 3 years prior to the implementation of the restriction there have been virtually no injury accidents on this stretch of road so I have to target my officers activities in other areas which have suffered with a higher than average number of collisions.

In addition to Roads Policing and Safer Roads officers, there are Safer Neighbourhood Officers who are often involved in Community Speedwatch schemes which is the second element to your query.

Whilst they will have competing priorities, the activities of these officers together with the volunteers, if appropriately trained, could be utilised in the 20mph areas.

It is worthy of note that a feature of a 20mph zone (or limit) is that it should, to a degree, be self enforcing. By that i mean that the road itself should be engineered to reduce speeds by building in chicanes or through the creation of speed humps. If speeds are reduced in this way then the need for active enforcement largely subsides.

Also, and I know it may sound obvious, but it is worth checking that the restriction fully complies with legislation (ie. the size and placing of repeater signs) so that it is legally enforceable before any such activity is undertaken.

I hope this helps to answer your query

I followed up as follows:

This is extremely helpful – and makes a lot of sense.

Is there an issue if I quote this publicly? The media ran a big story in Winchester saying that 20 mph was not going to be enforced (with the implication that it would not be enforced at all!) and your email makes it clear that it will be enforced in the same way as any other relatively safe road.

and got the following helpful answer back:

I have no objection to the comments being made public.

I am aware of some of the comments from the media and how the public perception may have been influenced by what has been printed.

As I say, the reality is that police activity in 20mph limits may be infrequent for the reasons given below but that doesn’t mean it can’t or won’t happen at all.

So there we have it. 20 mph will be enforced – but will, for wholly sensible reasons, not be the top priority for enforcement. 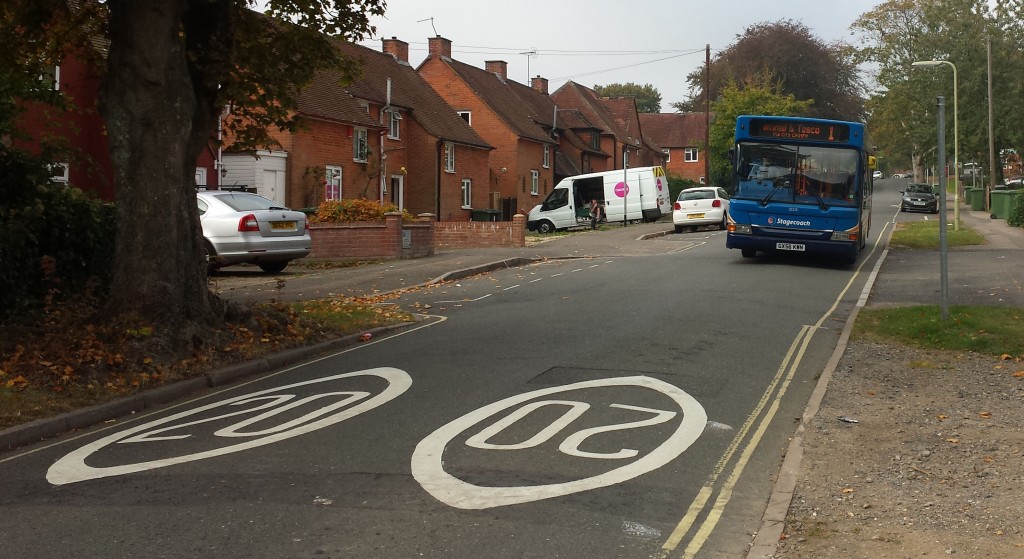 If you enjoyed this post, please consider leaving a comment or subscribing to the RSS feed to have future articles delivered to your feed reader.
This entry was posted in 20s plenty, Stanmore, Winchester. Bookmark the permalink.

2 Responses to Will 20 mph be enforced in Winchester? Here’s the answer…