Very pleased that Winchester City Council Planning Committee backed the campaign to save the Stanmore this morning.

All credit to the councillors of both parties (and none) who spoke and voted in favour of keeping the Stanmore as a community pub. 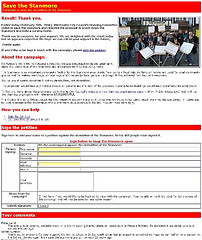 I’d built a website to help the campaign and the response it got showed how strongly people feel locally about keeping the Stanmore at the heart of the local community. After the officers recommended closure, a lot of people were telling us we didn’t have a chance. Sitting in the pub last night, preparing for today’s meeting, it felt like a last charge. Everyone, especially Glenn Sumner who spoke at the planning meeting on behalf of the Save The Stanmore campaign, was determined to give it their best shot.

Following through a link in Jonathan Calder’s Liberal England blog to an article about Greg Mulholland in the Bradford Telegraph and Argus, it turns out that we did it in CAMRA’s Community Pubs Week!

The CAMRA Community Pubs week website has a list of things to do to support the week, but I couldn’t find a reference to ‘saving the pub from closure’! 🙂

The campaign isn’t over. It’s still possible that there could be an appeal – and so we’re still asking people to sign the petition in case we need their help again. But that doesn’t stop today being a very satisfying day indeed.

If you enjoyed this post, please consider leaving a comment or subscribing to the RSS feed to have future articles delivered to your feed reader.
This entry was posted in Stanmore, Winchester. Bookmark the permalink.