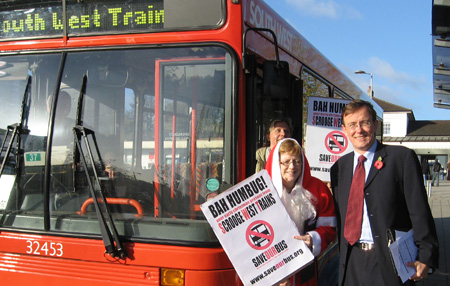 Up bright and early yesterday to join the campaign to save the Romsey-Winchester rail-link bus. This entailed getting the 7.04 a.m. bus to Romsey, putting on a Santa hat, and travelling back at 7.35 a.m. with Sandra Gidley and a bus full of protesters from the Save Our Bus campaign – before collecting signatures on the concourse from local travellers. Eleanor Bell joined us as the bus came back through Hursley.

It seems hard to believe that, so soon after all the County Council’s previous bus cuts, we’d be seeing another but cut – this time from South West Trains. As with all the bus cuts so far, it puts pressure on the environment, parking and congestion and severely impacts off-peak travel for people without cars (generally pensioners and the young). In this case, it will also cause major problems for people commuting to and from London before and after peak hours. It follows on from SWT’s off-peak fare hike at the beginning of the year and the upcoming closure of the travel centre and makes a mockery of the various promises from the County and the Government to have a joined-up travel system.

There was a huge public meeting last week in Romsey which Sandra Gidley reports on in her blog which highlighted how poor the understanding of the service is by both South West Trains and Stagecoach. Unfortunately I couldn’t get to it since it clashed with the meeting about the Tower – although I was at a meeting a couple of days earlier in Hursley which was also very well attended.

Matt and Nadine from the Save Our Bus campaign have done an amazing job on this. It’s worth contacting them to let them know you are a supporter, signing up at their website and joining the Facebook group.

Seeing Sandra in full Santa regalia reminded me of some earlier Santa-related campaigning of my own (which is where Michael Portillo comes in).

Back in 1984, I dressed up as Santa and went up to London with my colleagues Chris Thornton and Chris Chantry carrying a sack full of Christmas cards for Sir Keith Joseph as part of the (successful) campaign against his plans to cut the minimum grant and introduce tuition fees. Much to our surprise, we arrived at Parliament just as a brand new MP, Michael Portillo, was entering the Commons for the first time after winning the Enfield Southgate by-election. After taking photographs of Michael Portillo and his wife Carolyn – and then of me and the sack of cards – they followed up with various other combinations. “Excuse me Santa, can we take a picture of you and the Portillos” (no problem) followed by “Mr Portillo – can you get out of the picture please. We want a picture of Santa and Mrs Portillo” (?!). 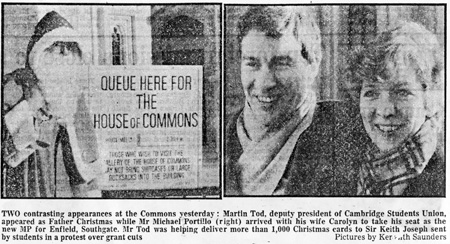 If you enjoyed this post, please consider leaving a comment or subscribing to the RSS feed to have future articles delivered to your feed reader.
This entry was posted in Bus Cuts, Eleanor Bell, Hursley, Michael Portillo, Romsey, Sandra Gidley, Tuition Fees, Winchester. Bookmark the permalink.