Charlotte Bailey’s website at http://www.ourcampaign.org.uk/noindustrialpark about the Poles Lane crusher has just been updated.

Unfortunately the Blake application has been recommended for approval. The following reason has been cited in support:

“It is considered the proposal would be in accordance with the development plan and would not materially harm the character of the area or the amenity of local residents and would be acceptable in terms of highway safety.”

We’re not giving up now, so Charlotte is asking members of the public to come and lobby the decision meeting at the County Council Chamber near the Great Hall in Winchester on Wednesday at 10 a.m.

She and Eleanor Bell have been working incredibly hard with local people on this campaign. The Conservative failure to stop part of Four Dell Farm being authorised as a general industrial site a couple of years ago has had very damaging consequences and knock-on effects for traffic and noise in the Otterbourne area. So far there has been no apology. 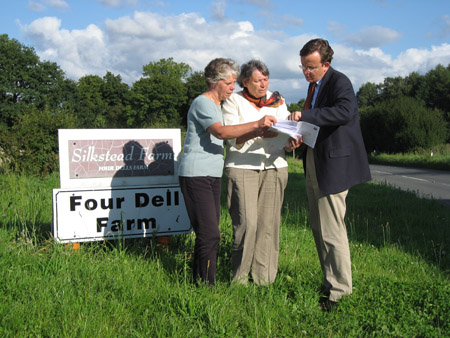 If you enjoyed this post, please consider leaving a comment or subscribing to the RSS feed to have future articles delivered to your feed reader.
This entry was posted in Otterbourne, Poles Lane. Bookmark the permalink.