Ladybirds in November – an inconvenient truth… 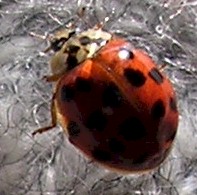 If the late autumn and Friday’s torrential rain weren’t enough to persuade me, a surprising encounter with a ladybird while canvassing proved enough to show that climate change is a real phenomenon, even in Winchester.

I was discussing a number of environmental issues while visiting a member in Otterbourne when a ladybird crawled across the window. Aside from the surprise of seeing a ladybird in November, it rapidly proved that this was no ordinary ladybird. It had more spots than usual and was quite large so the person I was visiting suspected it might be a harlequin ladybird.

We captured it in a jam jar, photographed it, submitted its details to the Harlequin Ladybird Survey website and sent its photo off for confirmation. Yesterday they emailed to confirm that we had correctly identified it.

Originally from Asia, it was early in 2004 that the harlequin ladybird reached the UK. It has been described as the most invasive ladybird on earth. Now we know it has reached the Winchester constituency.

The BBC has reported that scientists fear is that they will sweep aside many of the 46 species of the ladybird family in the UK.

There are a range of websites with more information (which unfortunately I can’t link to during the selection).

One thing I’d be keen to do to raise awareness of the climate change issue further is arrange a showing in Winchester of Al Gore’s ‘An Inconvenient Truth’ – either via The Screen or after the DVD comes out on December 27th. Reading Liberal Democrats have recently set up a showing at their local cinema and it would be great if we could do the same.

If you enjoyed this post, please consider leaving a comment or subscribing to the RSS feed to have future articles delivered to your feed reader.
This entry was posted in Environment. Bookmark the permalink.

One Response to Ladybirds in November – an inconvenient truth…