We’ve heard a lot from Nick Clegg and the people round him that we need to be a ‘party of government’.Â  Almost all Lib Dems agree with that â€“ although many disagree strongly that this also means that we should stop being ‘a party of change’ and turn into a ‘party of the status quo’ â€“ as our recent European campaign seemed to suggest.

But letâ€™s focus on what we all agree on â€“ and focus on the importance of being a ‘serious party of government’. Here are a few thoughts on what other ‘serious parties of government’ do differently to the Lib Dems andÂ what that might mean for how the direction of the party needs to change.

The other ‘serious parties of government’ donâ€™t agree with them.

While Labour donâ€™t always appear to be serious about government now, they certainly were under Tony Blair in 1997.Â  Remember this? 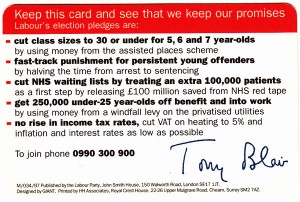 Itâ€™s a pledge card.Â  It even has the word ‘pledge’ written on it. And Labour were pretty serious about keeping to them.

Heâ€™s kept it â€“ even though itâ€™s far more expensive than, say, the tuition fees pledge.Â  And heâ€™s just made another couple with a 2017 referendum on Europe as a ‘cast iron pledge‘Â and another pledge to pensioners to increase the pension by 2.5% a year till 2020.

And this is hardly surprising.Â  People want to know what ‘serious parties of government’ want to do in the future.Â  This is particularly important in a coalition when there’s a real danger of giving the impression that what the government is doing is all youâ€™re about.

David Cameron and the Conservatives have gone with a “what weâ€™ve got and what we’ve been stopped from doing” strategy and havenâ€™t put any effort into telling voters what they’ve stopped the Liberal Democrats from doing.

The Liberal Democrat strategy does the opposite. It reinforces the Conservative message (always a bad sign) â€“ and does nothing to give any steer on what the Liberal Democrats would be doing or trying to do if governing alone or negotiating a new coalition.

In essence, it leaves the Liberal Democrats defending the coalition as the best of all possible worlds, rather than making clear â€“ as we should always be doing â€“ how we want things to be better than they are today.

Even more simply, Nick Clegg was the insurgent in the 2010 Prime Ministerial debates and won (at least the first one). He was the representative of the establishment in the 2014 EU debates and lost.Â Of course, that’s not the whole story. But a large chunk of the British electorateÂ – left, right and centre – are looking for change from where we are today – and only one person in the 2014 debate was seen to be offering it.

Two ofÂ the most striking examples lie outside the Liberal Democrats.

It’s no coincidenceÂ that Britain’s most electorally successful Prime Ministers – Margaret Thatcher and Tony Blair – started out being seen as outsiders challenging the status quo and having an agenda for change – and stayed that way more or less until the end.

Margaret Thatcher – to put it mildly -Â never gave any sense of satisfaction with the status quo or with the establishment until the day she died.

In both cases this could put them in conflict with members of their own party, but this was generally because they were seen as wantingÂ to change things too much or too quickly – and not because they appeared to be taking things too slowly.

And it wasn’t justÂ something that happened to get them elected first time. It was something they kept doing all the way through their terms of office.

But a complacent defence of the current situationÂ and treating the coalition government as the best of all possible worlds is no longer an option. If the leadership of our party could learn from other ‘parties of government’, startÂ telling us what they want to do if they weren’t held back by the Conservatives – what we’d be delivering if we had more MPs and a stronger position in Government -Â and get the party back to challenging the status quo, it would be a huge step in the right direction.