It’s been an inspirational couple of days meeting the Christian Aid “Cut the Carbon” marchers as they moved through the Winchester constituency from Chandlers’ Ford to Alresford on the last lap of their walk to London.

The march started in Bangor in Northern Ireland in July and has been through Edinburgh, Newcastle, Leeds, Birmingham, Cardiff and Bournemouth. By the time they reached Chandler’s Ford, some of the walkers had already walked more than 900 miles to build awareness of climate change. 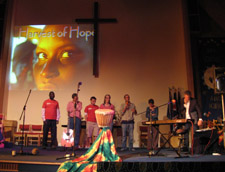 I was invited by Haulwen Broadhurst to a dinner to welcome them at Chandler’s Ford Methodist church – which was a brilliant evening. We ate well (but simply) – Martin John Nicholls (see right) provided inspiring entertainment – two marchers spoke about their personal experience – including one of the marchers who gave personal testimony about the effect of climate change in Burkina Faso. (The marchers are balanced between people from the developed world and the developing world).

I was so inspired that I asked a colleague – Jackie Porter – to come and join me in welcoming them when they arrived at St Gregory’s in Alresford. 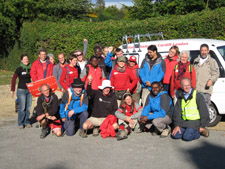 After their arrival, we got talking to two of the marchers – Geoff and Kate Davies who were marchers from the South African Faith Communities’ Environment Institute – about the work they are doing to bring together faith communities to work on the environment and social justice in South Africa – and ended up being invited to come to dinner again to continue the conversation. Once again, it was an inspirational evening. This time we heard from a speaker from Brazil about the impact of climate change in her country – and were reminded by a marcher from Britain about our responsibilities for these global problems in the west and the actions we need to be taking.

It was good to be reminded that the biggest cause of problems for the developing world is often our carbon emissions in the industrialised world, not those in developing countries – and that, although climate change is mostly hurting the world’s poor, the rich world is mostly to blame.

One of the purposes of the march is to get politicians and MPs to sign up to 80% carbon reductions by 2050 – vs the current target of 60% – and to require companies to account for their carbon emissions.

Since we’d passed policy in Brighton a few days supporting (indeed, in the case of carbon – where we want 100% reductions, exceeding) these goals – I was absolutely happy to sign up. I also promised to get people to back their campaign – so please go to their website and sign up to support their campaign if you can.

If you enjoyed this post, please consider leaving a comment or subscribing to the RSS feed to have future articles delivered to your feed reader.
This entry was posted in Alresford, Chandlers Ford, Environment. Bookmark the permalink.